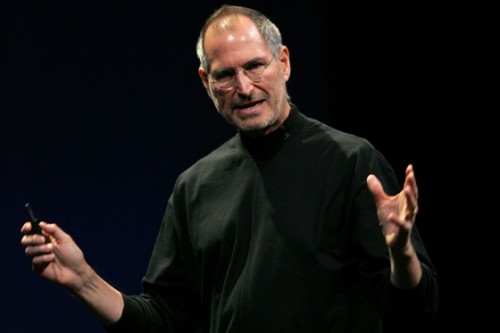 If you’re like me, when you heard about the passing of Steve Jobs, you had a panicked moment where all you could think about was how much more Mr. Jobs had to give the world, and how sad you were to be robbed of the fruits of those years. My love for Mr. Jobs is a selfish one, but it made me think how much I have come to depend on him to be the one — clad in signature black from the waist up, like my Pacific Northwest Johnny Cash— to introduce me every year (or if we were lucky, twice a year) to some technology so amazing and fun you hoped that you were the one who got to break it to your friends.

If you’re also like me, you looked around the internet to learn more about him. I found out a few sad things, of course. One was how he passed away. Mr. Jobs battled a rare form of pancreatic cancer, neuroendocrine cancer. I have a relationship with pancreatic cancer, which has astoundingly, the same one-year survival rate as it did forty years ago – a mere 5%.

Julie Fleshman of the Pancreatic Cancer Action Network said it well, of Jobs’ passing: “It is also a stunning reality that even those who have unlimited access to the highest level of care available cannot defeat this insidious disease.” Those of us who know and love people with this sad disease could see from Mr. Jobs extended periods of time off, and gaunt frame, that this was a man fighting for his life. I felt inspired to donate to the Pancreatic Cancer Action Network, a truly wonderful resource that actively petitions our leaders to provide more money for research for this incredibly under-funded disease. If you want to donate too, you can! Just go here: http://www.pancan.org/index.php
Donating there was something that I bought that I really love.

I also learned that Steve Jobs was adopted. Adopted. My God. This, to me is a movie in itself. Can you imagine adopting a baby and watching him grow up to be this kind of historically important thinker? His brain itself already so miraculous and mysterious. And now, fell into the lap of these loving parents through adoption? In my mind, the Jobs family found him floating down a river like Moses. People can tell me otherwise, but that’s what I’ll always believe, sorry.

I was delighted to find this great picture of him from when he was a younger.

I had this computer! My older brother and I fought over it to see who could play Gauntlet on it. And then I saw this picture, where Mr. Jobs is excitedly presenting the very computer I am writing this blog on:

That’s an almost thirty year span of computers he’s created that I’ve depended on and loved. And for every change in technology, every tweak made to make the computer more and more perfect, I’ve stuck with him to see what would happen next. Many of us have had a lengthy, happy marriages to Steve Jobs creations. That’s pretty amazing.

And then I found something he said which really stuck with me. Mr. Jobs considered himself an artist, which I love. Here it is:

One of my role models is Bob Dylan. As I grew up, I learned the lyrics to all his songs and watched him never stand still. If you look at the artists, if they get really good, it always occurs to them at some point that they can do this one thing for the rest of their lives, and they can be really successful to the outside world but not really be successful to themselves. That’s the moment that an artist really decides who he or she is. If they keep on risking failure, they’re still artists. Dylan and Picasso were always risking failure. This Apple thing is that way for me. I don’t want to fail, of course. But even though I didn’t know how bad things really were, I still had a lot to think about before I said yes. I had to consider the implications for Pixar, for my family, for my reputation. I decided that I didn’t really care, because this is what I want to do. If I try my best and fail, well, I’ve tried my best.

Rest in peace, Mr. Jobs. You are the best.