(Originally titled “Unlikely Community Managers.” This post was originally written for the “Social Media in the Enterprise” course at Syracuse University, taken as part of the curriculum for my MLIS degree. The original post may be accessed at the class blog, RotoloClass. Direct link here.)

In their book “Trust Agents,” Chris Brogan and Julien Smith write about successful community managers, or trust agents. One of the most crucial characteristics is the ability to “humanize” the Web. By leveraging social media tools, celebrities also humanize themselves.

I started to review all the times I’ve interacted with a celebrity I admire, and how a simple direct response was enough to make my entire day and make me a fan for life, similar to Kelly Lux’s experience with Wegmans.

When I joined Twitter three years ago, my first task was to quickly follow my favorite celebrities: writers and athletes or actors alike. Then I started to respond to their tweets in the hopes of having some kind of direct interaction with them that I couldn’t finagle in real life.

Eventually, my efforts proved fruitful. Shaquille O’Neal responded to me! When he first started to tweet profusely and before he retired, Shaq would have mini-contests with his fans. At away-games, he would tweet out his location, and the first fan to physically meet up with him would get two free tickets to that game.

Now I can’t recall exactly what I tweeted to him, but I do remember being overly excited that *SHAQ* responded to me, a random girl in San Francisco who has been following his career with her dad since she was a little girl. This simple ploy really helped Shaq connect with his fans, not only online but in the real world too. It became a fun contest to see who could find Shaq first.

Jim Lee, comic book artist and current DC Entertainment co-publisher, is also very active on Twitter. His tweets are a good mix of personal tweets about his family and doodles or sketches he’s working on, and he often responds to fans, as evidenced below: 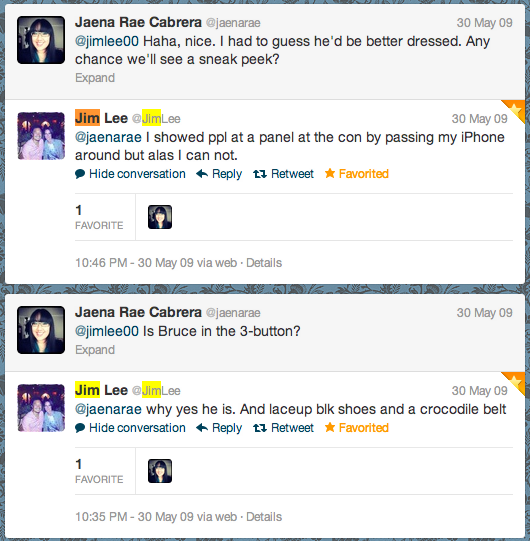 For some context, Jim Lee had just tweeted a sketch of Bruce Wayne and another character in different business suits.

An integral element in being a good community manager is recognizing that you also must be an active participant within the community you want to manage. By sharing useful, interesting and entertaining content, Jim Lee and Shaq keep their followers engaged and invested in their activities. Shaq and Jim Lee also know that engaging followers also involves regularly responding to or addressing their comments. As a fan and avid follower myself, I know that these little acknowledgements are incredibly effective. By examining our own reasons for admiring certain brands or people, we can quickly see what makes them successful and apply that to our own social media efforts.

I’ve only used Twitter as an example here, but have you experienced effective community management on other social networks? What other brands, companies or people have won you over as a fan for life?