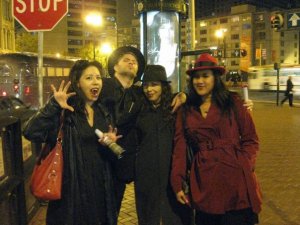 I know I’ve been away for quite some time and I have no good reason for my absence. The annual visit of the Carson delegation was this past weekend, and as we were walking toward Coit Tower, Leibs pointed out that I haven’t Snip Snapped in a while.

So. Here is a promise: Despite my busy schedule, I will attempt to sit down and devote at least 15 minutes of my day to my blog.

Starting… later today. For now, here are a few photos from my Halloween shenanigans.

The first photo was taken after the screening of “Nosferatu” at the SF Symphony. There was live organ music and special sound effects throughout the film. It was incredibly geeky entertainment. In the photo, you will spy Christine with the fangs, and Caroline and Brian in the fedoras.

An evening at the symphony also made us all feel very snazzy and classy, which is unusual for Halloween these days, what with the barely-there-costumes that expose tons of cleavage and about 10 inches of thigh. More often than not, it’s clear that you are a human female. No real need to prove it with tiny skirts. 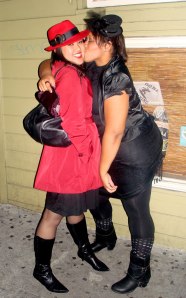 This Halloween proved much more exciting than last year’s. I can’t even recall much of that evening, other than dinner with the Carson kids and visiting the Castro for a bit.

After the symphony, the lollipop-licking Kojak (Alex) and I tried to make it to a party, but we took the incorrect bus and ended up on the wrong side of Golden Gate Park. Rather than figure it out or walk through the park at 11 p.m., we called Mosby and headed for a bar. She’s the lady giving me the long peck in this last photo.

We know one of the bartenders, so one of our drinks was on-the-house. The rest of the evening was spent chatting and people-watching. Very mellow, very nice. That is, until the other patrons became more rowdy.

We started watching the small party sitting next to us. The women were all sexy cops, while the men’s costumes varied from prisoners to a California raisin. One couple got up to dance. The usual bumping and grinding sort of dance. She was wearing a tiny cop costume, while he was dressed as a prison inmate. When they noticed we were taking random photos, they posed for us and right before the flash, he lifted up her skirt, exposing her entire thong-clad ass to us. We were shocked and she was angry, but because she was drunk she let it go rather quickly.

Mmm… tasteful. But perhaps I’m being a bit uptight. I was taught to always be a lady, and even though I sometimes disagreed with my grandma about what to wear and how to conduct myself with men, I was always very aware of my own self-respect. Besides, it chills me to merely imagine how my dad would react if I was even remotely like a hussy. He wouldn’t be mad, but he’d certainly be disappointed. I have boundless respect for him, and I would never do anything to injure his respect for me.

But again, I digress. I’m testing the waters here. I haven’t written anything personal in perhaps two months, and it feels like I will soon implode if I don’t do so soon.

More to come later today, perhaps when I get home from my journalistic jaunt into the Mission.

One thought on “This is a promise.”