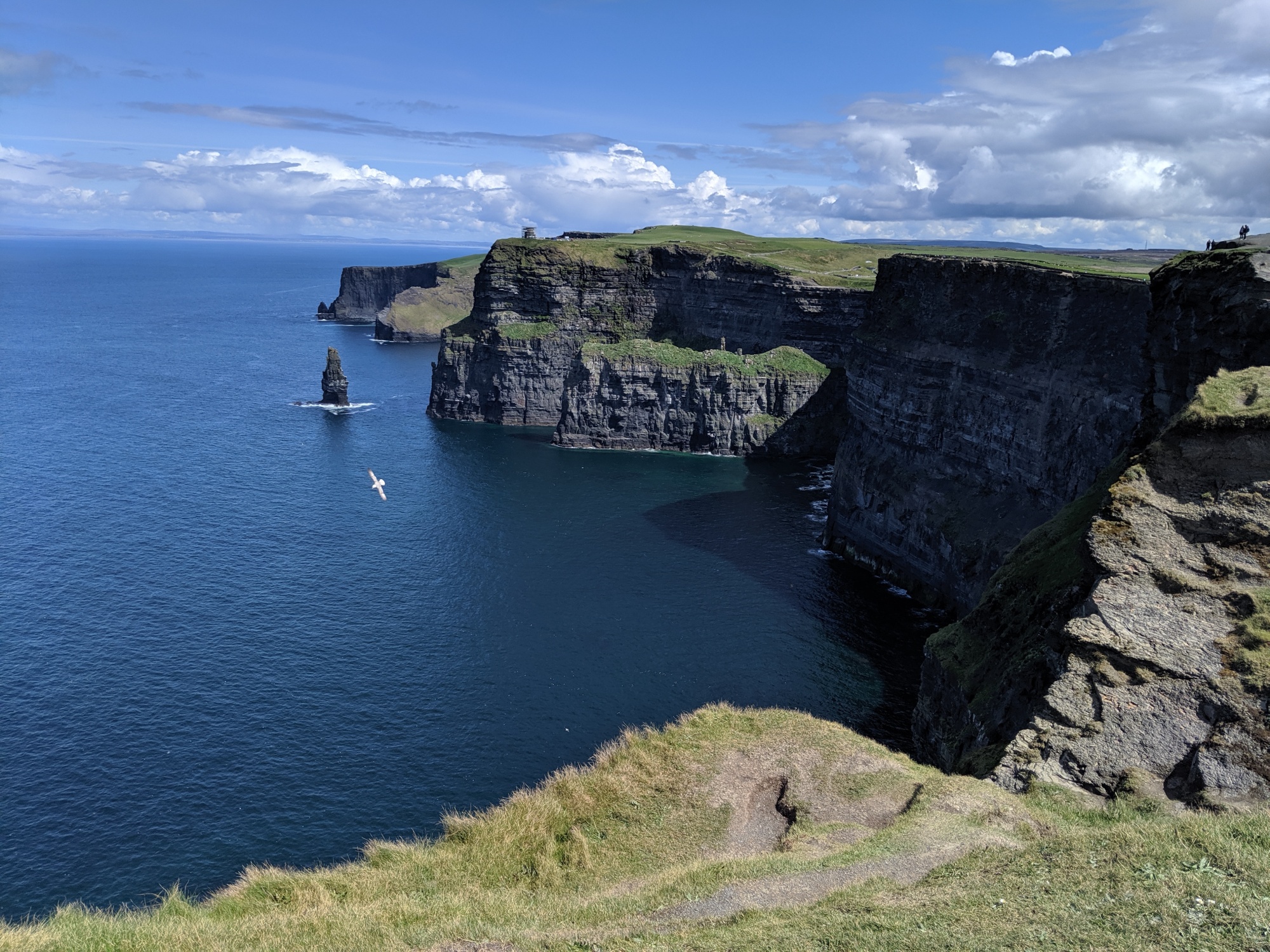 Perhaps traveling alone will become my modus operandi. I’ve just returned from a week in Ireland, and I couldn’t feel more refreshed and relaxed. It was a sorely needed trip for my soul, and allowed me to reconnect with myself in a way I haven’t done for years. I feel a little more whole, a little happier with myself.

My trip began last Wednesday after work. I hightailed it to SFO and proceeded to make a few phone calls while waiting to board. I called my brother, my dad, my mom, and Tony. My family, mostly to reassure them that I would be fine, and Tony just because I like shooting the breeze with him.

Day 1: After an 11 hour flight and a brief layover in London, I finally made it to Dublin, where the skies showed no mercy. Big droplets fell from above, making it a little difficult to make my way to my Airbnb.

But an hour bus ride later, I made it! And met with Collette, who showed me my private studio for the week. After she left, I settled in and dried off, waiting for the rain to pass. I’d arrived in the early afternoon, so I had plenty of time to chill before heading out for dinner.

Eventually, I found my way to The Brazen Head, a pub claiming that it was the oldest in Dublin, established in something like the year 1198. It was really lively and full of both locals and tourists. I overheard a number of American accents mingling with the soft, lilting Irish one. I grabbed a seat at the bar, ordered a pint of Guinness and a bowl of Irish beef stew, and was chatted up by a guy from New Jersey. He was already pretty toasty, so he was loud and a bit obnoxious. When he left for the restroom, both the bartender and another young man at a nearby table asked me if I needed help, and that they’d be willing to rescue me if I needed it. How nice is that? Humans having a natural concern for another human. I could handle it though and profusely thanked them.

After dinner, I attempted to sleep but only managed a few hours before I had to get up for my trip to the Cliffs of Moher and Galway. After a roughly three hour drive, we finally made it to the cliffs. I climbed the gently rolling hills to the top.

Absolutely stunning. The weather had cleared up, with the sun highlighting the intense blues and greens of the Irish coastline. I walked along the edge of the cliffs, feeling the wind coming up from below. Despite all the other tourists, it was positively serene. I could have sat in the grass for hours there, content to be present with the sun, waves and wind.

After a quick lunch in a small town called Doolin, we made our way to the city of Galway, also along the western coast of Ireland but a bit north of the cliffs. Galway was a beautiful, romantic little city. Legend has it that the Claddagh ring originated from Galway.

As you can see, I purchased a gold one. The hands represent friendship, the heart love, and the crown loyalty. How the bearer wears it also indicates relationship status. In my photo, I’m wearing it on my right hand and I have the heart pointing outward, signifying that I’m still looking for love, friendship and loyalty. Flipped around, heart pointing inward, would mean that I’ve found someone. Worn on the left hand, the ring means either married or engaged. I’ve always wanted a proper Claddagh ring, and I’m at a point in my life where I feel like I’m searching for something, but I haven’t figured out quite what that something is yet.

We arrived back in Dublin around 8:30 p.m. I grabbed a quick dinner before meeting up with another solo American I met on the tour. He and I visited about four different pubs in Temple Bar before calling it a night around 1:30 a.m.

Day 2: Another day, another tour. This time I boarded a bus for Northern Ireland, sights set on Belfast, Giant’s Causeway, and the Carrick-a-rede Rope Bridge. It’s been 10 years since I was last in Belfast, so I was eager to see how things may have changed. I decided to take a Black Cab Tour of the city. The driver drove us around Belfast, showing us the political murals and the Peace Wall. He gave us a biased but very interesting history of The Troubles, and the ramifications that still govern the city today. Here’s a small sampling of what we saw:

After Belfast, we headed to Giant’s Causeway, a natural rock formation caused by an ancient volcanic fissure eruption. Another short hike took us above and around the Causeway, before we descended the large hill to examine it more closely.

More stunning views, and the sky was so clear that we could see the Scottish islands from the Irish coast. That nature can create such nearly perfect hexagons is amazing.

Next stop was the Carrick-a-Rede Rope Bridge, a short bridge connecting the mainland to the tiny fishing island of Carrickarede. There was a short queue but it went by very quickly. You can’t really dilly-dally for long on the bridge itself.

I made another friend on this tour, Kara from Ontario. She was also traveling alone. I tended to gravitate toward other folks who were doing as I was. It’s actually a great way to meet people, and I notice I’m actually less shy when I’m out on my own.

By the end of day 2, I was pretty exhausted. I had slept maybe an hour after Temple Bar, and I couldn’t make myself go out any longer. I had fish and chips with Kara before slowly making my way back to my studio.

Day 3: Sleep proved elusive yet again, but I was able to sleep in for an extra hour before heading to Trinity College and an early peek at the Book of Kells. There was no photography allowed of the books, but I did take a few photos of the opulent Long Room of the library.

Our guide then took us through a walk of Dublin, toward Dublin Castle, which hardly looks like what one would imagine. It was redone in the Georgian style a few centuries ago. I didn’t take many photos there.

I did, however, take a photo of good old Molly Malone along the way. Our tour guide sang us a little ditty that begins like this:

In Dublin’s fair city
Where the girls are so pretty
I first set my eyes on sweet Molly Malone
As she wheeled her wheelbarrow
Through the streets broad and narrow
Crying “cockles and mussels, alive, alive, oh”

The streets in Dublin are all labeled in English and Gaelic. Gaelic is such a difficult language. Its sounds don’t appear to match the letters, and the words tend to have many syllables.

After Dublin Castle, I just wandered around the city until I found myself on Grafton Street, one of Dublin’s main shopping thoroughfares.

Within a city, I like to walk around. I do it in San Francisco as well. You get a better feel for the personality of a city, and it was fun to see familiar sights and reminisce about one drunken weekend in Dublin ten years ago.

Day 4: So, I wasn’t entirely alone in Ireland. On Monday, I took an early bus back to Belfast, to meet my friend JK. I met him years ago when I studied in Ireland, and due to the magic of social media, we’ve kept in touch. JK appointed himself my tour guide and proceeded to show me Belfast from his perspective. First, we went to the interactive and immersive Titanic exhibit. But I was most excited for the Game of Thrones exhibition, as you can plainly see from the photos.

We then visited a few of pubs he likes. It was really nice to catch up and hang out with a friendly face in a strange land.

Day 5: Nearing the end, folks. Tuesday was my last full day in Ireland. It was also the only day I had a full night’s rest. It took me five days to acclimate to the 8-hour time difference.

I did a Jameson Distillery tour, and the Guinness Storehouse tour. So many tours. By the end of my trip, I was all Guinnessed out, which is a good thing because I don’t drink it here in the States. It just doesn’t taste the same. It isn’t as smooth and velvety here. I did learn how to properly taste whiskey, and how to pour the perfect pint of Guinness.

It was a short trip. Too short. I wasn’t ready to return to San Francisco. Already, the trip feels surreal, but it also may be my lack of sleep. Yesterday, I got up at 3:30 a.m. Today, I woke up at 2:30 a.m. I know this can’t last forever, but I might as well take advantage of being an early bird. I’ve already done a short workout, and banged out this blog entry.

I was a little worried about traveling alone. One hears many horror stories of women traveling alone and being taken advantage of, but I didn’t heed those warnings and figured I’d be fine. And I was! It was even liberating to fly in the face of those warnings. I can’t let fear hold me back from doing anything I have my heart set on.

Again, it was very freeing. I had complete autonomy over everything I did. My schedule was mine, and mine alone. I had total control, outside of being ferried around the country by tour buses. I chose the tours so I’d have some type of schedule, and it was nice to not worry about transportation from site to site. Plus, the bus wifi probably saved me a ton of money on phone fees.

There’s something about being completely anonymous in a big city. It’s rich with possibilities. I had zero obligations to anyone but myself. I could stay out as late as I wanted, or I could turn in early without feeling guilty. I was free to be myself, without any baggage or history or expectations.

And you know what? I generally like myself. That’s what I’ve been learning with all my semi-enforced solitude lately. I just need to internalize that idea more, that there are things to like about myself. And some of those things are why others enjoy my company.

I’m not so terrible after all.